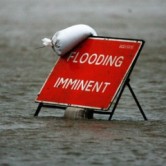 Dozens of flood alerts and warnings have been issued across England, Wales and Scotland in the last couple of weeks or so. The south-west of England is expected to be the worst affected, while parts of North Wales have already experienced exceptionally large waves that have risen over coastal defences and caused chaos for local coastal communities.

The reason for the flood warnings is the unusually high tides that have occurred following the recent supermoon, when the moon appears bigger and brighter than usual. Strong winds and a deep low pressure system near the UK have also enhanced the effect of the swell.

This type of high tide is not uncommon and is known as a spring tide. It might seem strange to experience spring tides in autumn; however, you can get spring tides at any time of year. The spring tide gets its name from the concept of the tide ‘springing forth’. These tides occur twice each lunar month, during a full moon and a new moon, when the Earth, moon and sun are in line with each other and the gravitational forces of the sun and moon cause the oceans to move more than usual. As this can take some time, you normally feel the impact of a spring tide a few days after a new or full moon has occurred.

When spring tides occur ‒ especially after a supermoon – and the threat of flooding increases, paying attention to tide times is really important if you like to spend time by the sea. Keep up to date with any flood alerts or warnings in your local area, as these can change regularly. With the clocks recently going back an hour and the nights drawing in rapidly at this time of year, check tide times and avoid getting caught in the dark on the beach.

Get our latest posts straight to your inbox!