A recent Greenpeace voyage around the coastline of Scotland took place to ascertain the impact of plastic pollution off our shores. Crucially, the expedition aimed to see just how plastic waste is affecting our seabird and wildlife populations. The two-month voyage by the ship Beluga II revealed some startling findings. The Greenpeace researchers discovered that

According to the Royal National Lifeboat Institution (RNLI), the number of lifeboat launches that took place around the UK and Irish coastline in 2016 totalled 8,851. This represents a seven per cent rise compared with the year before and the highest number of rescues since 2011. It was not just lifeboats being launched out to

A trip to the coast does not necessarily mean getting away from it all amidst windswept isolation. If you are looking to combine a seaside break with a city experience, there are lots of British cities that give you the best of both worlds. Here are five to consider. Liverpool Situated on the river Mersey,

Weather warnings have recently been issued for heavy snowfall across parts of the UK and many coastal areas could be affected. Although lots of us like to hunker down indoors keeping warm when snowy weather arrives, it is an irresistible invitation for others to get out and about and enjoy the wintry weather on a 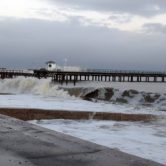 Just a few days after welcoming in 2017, the first storm of the year came crashing in along the east coast of England. A storm surge across East Anglia ushered in unusually high tides across the region, with many coastal areas affected by flooding. Flood alerts were issued by the Environment Agency, with areas such